In the morning hours of the given date, Station 51 and Station 56 (Marydel) were both dispatched via 911 for house fire in the 2600 block of Hartly Road. Once units arrived on location, no smoke or fire was noted and it was discovered that the heater back fired within the residence causing a smoke condition which prompted the homeowners to activate 911. Once no extension was observed, the scene was placed under control and 51 units returned to service. While 51 units were backing into quarters, Kent Center contacted them and advised them to make a response to the intersection of Hourglass Road and Taraila Road for a vehicle fire. Once units arrived on location, crews observed a single pickup truck on the roadway with the passenger compartment involved. Crews deployed a handline to extinguish the fire while EMS assets make contact with the vehicle occupants to check for injuries which none were reported. Once the fire was knocked, the scene was placed under control. Once DSP arrived on location, the scene was turned over to them and 51 units returned to service. Deputy Chief Read had command of both alarms. 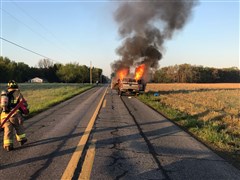 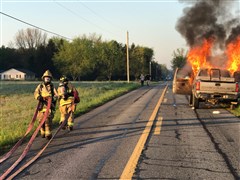 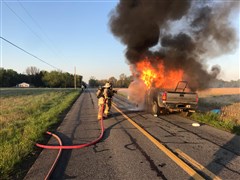 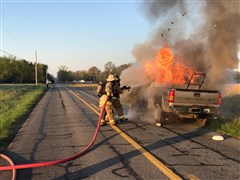