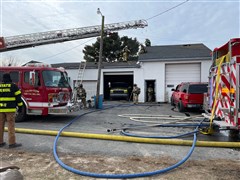 In the morning hours of the above date, Station 51 was dispatched along with additional mutual aid companies and agencies for a working commercial structure fire in the 2300 block of Sudlersville Road. Engine 51-2 arrived on location as the first due engine and initially reported a single story commercial structure with nothing evident. A 360 was completed and command advised smoke showing from the Charlie side. Interior crews began to open up the attic and found active fire beginning to run the void space. Crews from Hartly, Clayton, Sudlersville, Dover, Ambulance 64, KCEMS, DSFM and DelDOT worked for approximately an hour to bring the fire under control. Chief Read had the command. Special thanks to Station 43 (Cheswold) for providing an engine coverup at Station 51. In the early afternoon hours of the above date, Station 51 and Station 56 (Marydel) were both alerted for a garage fire in the 6200 block of Halltown Road. Prior to units responding, the incident was upgraded which brought in Ladder Company 46 (Dover), Tanker Company 41 (Camden), KCEMS and a coverup provided by Station 45 (Clayton). Engine 51-2 arrived on location, minutes after dispatch and reported a fully involved garage with multiple vehicles on fire and exposure to a nearby residence. Crews deployed hand lines to protect the exposure initially and then made an attack on the fire. As operations were beginning, Kent Center contacted command and advised them that there was a bed bound subject within the residence. Arriving crews made entry to the residence and assisted with the removal of the subject while checking for any extension which none was found. Crews from all agencies worked for approximately an hour to extinguish the fire. The Delaware State Fire Marshall is investigating the fire and Chief Fox had the command.

As crews were clearing from a first due camper fire on the evening of November 26th, Kent Center contacted Command 51 and advised them that they were taking a second emergency in the district for a working house fire in the 300 block of Judith Road. Station 51 units along with mutual aid departments made the response and arrived on scene within minutes of dispatch. Interior crews encountered fire conditions in the basement, the first floor and the attic. While units were operating, a radio transmission of collapse was relayed and a Mayday was declared by command. One minute after the Mayday was declared, interior crews advised that they were under control and the Mayday was cleared. The scene was then placed under control with units from Station 51, Station 56 (Marydel), Station 41 (Camden), Station 46 (Dover) and Station 45 (Clayton) working further on overhaul. Deputy Chief Read had the command. Special thanks to Queen Anne’s County, Maryland Station 6 (Sudlersville) for providing a cover up at the station. 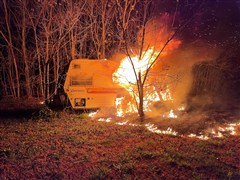 In the early evening hours of November 26th, Station 51 was dispatched for a camper fire at the intersection of Taraila Road and Proctors Purchase Road. Command 51 arrived on location shortly after dispatch and reported a 10’x15’ camper with fire showing. Engine 51-2 was directed to deploy their bumper line and extinguish the fire. Due to the fire beginning to spread to the nearby field and woods, Brush 56 was requested. Units operated for approximately 20 minutes. Deputy Chief Read had the command. 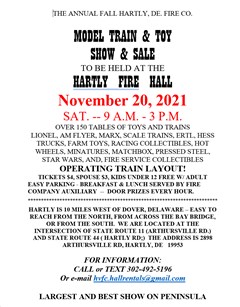 Annual Train Show is back! November 20th bring your train enthusiast and collectors to the station. There will be vendors, a large model train display, and food from the Harlty Ladies Aux. 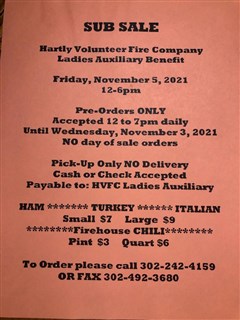 Ladies Aux is hosing a Sub Sale next weekend. Don't forget to place your orders by November 3rd.