In the evening hours of January 7th, Hartly's volunteers were alerted along with mutual aid compaines for a house fire in the 2900 block of Pearsons Corner Road. Command 51 arrived on location several minutes later and reported a single story SFD with smoke showing. Just prior to units arriving on scene, command then reported fire showing from the A/D corner. Once units arrived on scene, an interior attack was made and searches were preformed. Once the fire was knocked and searches were negative, command placed the scene under control with units working. A special thanks goes out to mutual aid compaines being Station 43 (Cheswold) and Station 46 (Dover) for their assistance. Chief Fox had the command. 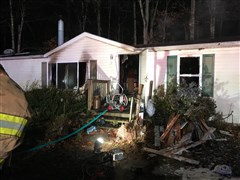